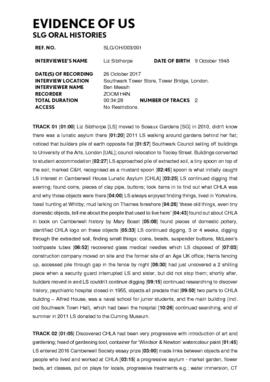 Part of the South London Gallery's Evidence of Us heritage programme.

Camberwell House Lunatic Asylum opened on Peckham Road in 1846. By 1878 it was the second largest asylum in London, licensed to accommodate 362 patients. It closed in 1955 and the buildings became council offices, while the grounds on the north side of Peckham Road became part of the new Sceaux Gardens estate.

In 2011, some of the former asylum buildings were converted into UAL Camberwell School of Art student accommodation. It was during the building work that Sceaux Gardens resident and South London Gallery volunteer Liz Sibthorpe found a mustard spoon lying in a pile of recently upturned earth. It bore the initials ‘C H’. Over the next few weeks Liz excavated a large collection of other objects from Camberwell House including keys, rings, shards of pottery, buttons, and even dolls, which prompted her to carry out her own research into the organisation.