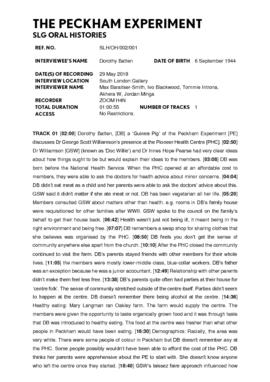 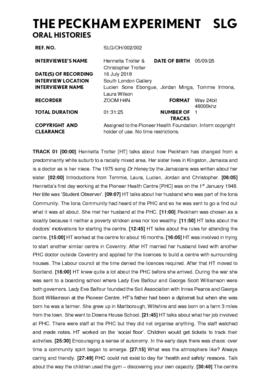 Interviews were conducted as part of 'The Peckham Experiment: A Centre for Self-Organisation', a Heritage Lottery funded project led by the Art Assassins (the SLG's young people's group) working with the Pioneer Health Foundation (PHF), the Wellcome Library and the Science Gallery at Kings College, as well as Peckham Vision and the Wilderness Wood.

The Peckham Experiment was a pioneering health movement founded by doctors George Scott Williamson and Innes Hope Pearse in 1925. They believed that through a holistic approach to healthy living, well-being and social interaction, disease and illness would be reduced. Initiated twenty-three years before the establishment of the NHS, the Peckham Experiment offered bespoke on-the-doorstep healthcare and support for the whole family. It was run out of the Pioneer Health Foundation, firstly on Queen's Road Peckham and later in a purpose-built space on St Mary's Road.