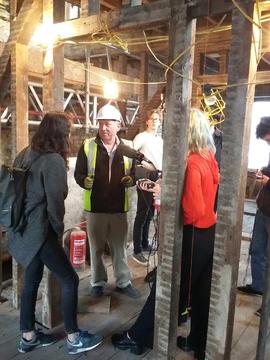 In 2014 the South London Gallery was given the former Peckham Road Fire Station by an anonymous donor.

Built in 1867, one year after the formation of the Metropolitan Fire Brigade, the station was decommissioned in 1925 (a new fire station opened one door down on the corner of Talfourd Street and Peckham Road). The building was sold to Kennedy's, a local butcher and pie-maker, who owned it until 2007 when the company ceased trading. By 2014, it was semi-derelict and was in need of comprehensive restoration. Following extensive planning and community consultation the SLG started building work in March 2017. The project included major support from the Heritage Lottery Fund, the Mayor of London and Arts Council England.

With designs by award-winning 6a architects, the Fire Station is now a mixed-use building over four floors, maintaining the original layout of rooms as far as possible. It opened as the SLG's annexe in September 2018.