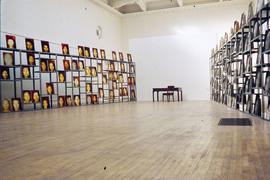 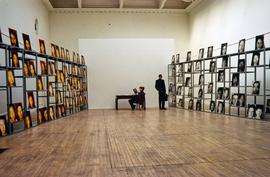 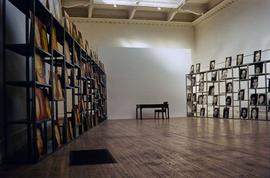 Photographs of the installation '1822 - Now' by Zarina Bhimji exhibited at the South London Gallery from 8 March to 2 April 1995. The installation was comprised of over 100 photographic portraits of people of mixed race or those who were involved in interracial relationships. The piece was inspired by Bhimji's residency at Kettle's Yard and Darwin College of Cambridge, during which the artist reflected on eugenics theories, their lack of scientific basis and fundamentally racist nature. The exhibition presented two further works by Bhimji: "No title" which showed a scattering of petals on a black latex sheet, commissioned by the Public Art Development Trust / Charing Cross Hospital, and "Vulnerable and Sticky", another photograph of a latex sheet but this time with a depiction of fresh brains laid out on it.

The exhibition had previously been shown at Kettle's Yard and was later displayed at Plymouth Arts Centre.

The images in this catalogue are for your own personal non-commercial use only. All images are copyright of the artist or artists whose work is shown in the image (or their estate), and the photographer.